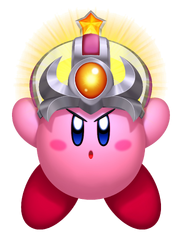 Crash Kirby is one of Kirby's copy abilities, introduced in Kirby's Adventure. It is a single use ability that creates a huge explosion, clearing the screen of enemies. Kirby wears a silver crown with a glowing dome with a golden star on top and an orange gem on the front. It is commonly obtained from Bomber.

Crash Kirby is an incredibly powerful ability that hits everywhere on the screen doing massive damage to every target; however, is can only be used once to compensate for this. Kirby summons a massive energy surge around him that engulfs the screen, burning every enemy on-screen. It can also light fuses and activate switches.

Retrieved from "https://nintendo.fandom.com/wiki/Crash_Kirby?oldid=449494"
Community content is available under CC-BY-SA unless otherwise noted.