8811clubpenguinorigee9.png
A Fake Boxart of the Game that appeared on the internet before the game was announced.
Cp-ds-art-blog2.jpg
The Current Club Penguin Game.

New Game At The Dance Club 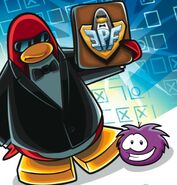 In this game, you will be able to earn coins, and upload them to your account on Club Penguin.

Retrieved from "https://nintendo.fandom.com/wiki/Club_Penguin:_Elite_Penguin_Force?oldid=80851"
Community content is available under CC-BY-SA unless otherwise noted.