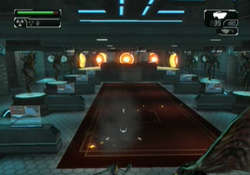 Closure is the ninth and final mission in The Conduit. It's where the player attempts to shut down John Adams and The Trust.

Michael Ford enters the final two rooms in the Trust Base. After battling a seemingly endless barrage of enemies, he hears Prometheus' voice. Apparently Prometheus was able to upload his consciousness directly to the All-Seeing Eye before his body was destroyed.

John Adams then activates the Base's self-destruct system and locks down all the conduits. Even though Adams is still out there somewhere, Ford has to hack the data terminals to reactivate one of the conduits. Having done so, Ford jumps through the portal to make his escape...not knowing where the portal will take him.

Retrieved from "https://nintendo.fandom.com/wiki/Closure?oldid=310295"
Community content is available under CC-BY-SA unless otherwise noted.