Chrom is the main protagonist of Fire Emblem Awakening. He is the prince of the Kingdom of Ylisse, and the descendant of the Hero King. He is the brother of Lissa and Emmeryn, and the father of Lucina.

He is in charge of the vigilante force known as The Shepherds investigating Plegia's actions. He is the wielder of the legendary Falchion.

Chrom also appears in this game as a Mirage for Itsuki Aoi. As a Mirage, he starts in the Lord class and can promote to either a Great Lord or a Conqueror.

Chrom appears as a part of Robin's Final Smash, Pair Up to help deal damage. He also shows up during Robin's Palutena's Guidance. Chrom also appears in the reveal trailer for Robin and Lucina, lying on the floor defeated presumably by Captain Falcon. In the third set of DLC, Chrom was added as a Mii costume.

At one point during development, Chrom was being developed as a fighter. However, he was scrapped due to his similarities to other Fire Emblem fighters. 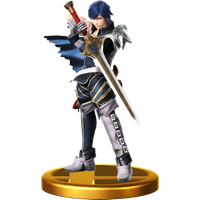 Chrom appears as Roy's Echo Fighter in Super Smash Bros. Ultimate. Even though he is heavily based on Roy, he has certain moves based on Ike like his recovery. Like Lucina, Chrom has the damage dealt throughout the blade instead of at the hilt like Roy. He also lacks elementals to his attacks. Strangely, Chrom still appears in Robin's Final Smash.

Chrom appears in WarioWare Gold, in one of 5-Volt's microgames. The player must select Chrom and move him to defeat the boss Victor before time runs out.

Chrom is featured as a playable character in Project X Zone 2 where he is paired with Lucina. Chrom is one of the three Nintendo characters in the game the two other being Lucina and Fiora.

Chrom appears in Dragalia Lost as part of the Kindred Souls event.

Prince of the Halidom of Ylisse, and leader of a militia called the Shepherds. While he himself worries that he comes across as cold, he's idolized as a good man without pretense, and one who fights at the forefront for the sake of peace.

Retrieved from "https://nintendo.fandom.com/wiki/Chrom?oldid=544096"
Community content is available under CC-BY-SA unless otherwise noted.