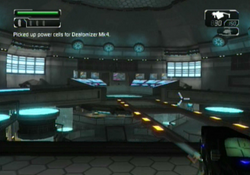 Checkmate is the eighth mission in The Conduit. It's where the player learns the truth about Prometheus.

Having traveled through the conduit in the Washington Metro subway tunnel, Michael Ford now finds himself in the middle of the Trust Base. He is immediately attacked and has to battle his way through.

Working his way through the Labs, Prometheus reveals that he is in the Base waiting for Ford. Ford finds him in an incubator. Prometheus turns out to be an alien creature called a Progenitor. John Adams was extracting Prometheus' DNA to genetically create the Drudge creatures.

In order to stop production of the Drudge, Prometheus orders Ford to kill him, ultimately destroying the source of the Drudge. Regrettably, Ford does in fact deactivate the incubator, killing Prometheus. Ford then heads into the elevator, expecting one final battle...

Retrieved from "https://nintendo.fandom.com/wiki/Checkmate_(conduit)?oldid=310299"
Community content is available under CC-BY-SA unless otherwise noted.