Charmy Bee is a character in the Sonic the Hedgehog series. He is the youngest member of Team Chaotix and usually just likes to have fun. He is six years old, making him rather immature. However, he is still an important part of Team Chaotix, as he is able to fly. Although he and the rest of the team may come across somewhat minor, they have made numerous major appearances throughout the Sonic series. 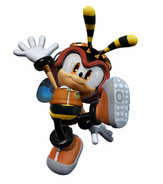 Sonic Channel.
Add a photo to this gallery
Retrieved from "https://nintendo.fandom.com/wiki/Charmy_Bee?oldid=534050"
Community content is available under CC-BY-SA unless otherwise noted.