Charles Martinet (born September 17, 1955) is an American actor and voice actor, who is best known for portraying many of Nintendo's famous characters, most notably Mario and Luigi.

He got the job in 1994 while Nintendo was looking for people to do Mario's voice. After the audition, a Nintendo employee called the company, telling them that they found the perfect voice. 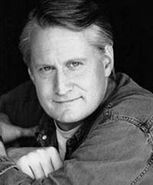 Charles' face when he does Waluigi.

Martinet at the GalaxyCon Richmond 2020.