Meaning: Waterfall Country) is a primitive-themed location in Super Mario Odyssey. It is the greater location of Fossil Falls (JPJapanese: ダイナフォー

Meaning: Dinosaur Falls) and the second kingdom in the game. The Regional currency is purple wheels.

Note: 5 Power Moons are needed to power up the Odyssey.[1] 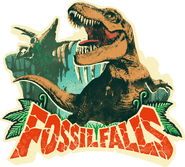 Retrieved from "https://nintendo.fandom.com/wiki/Cascade_Kingdom?oldid=517389"
Community content is available under CC-BY-SA unless otherwise noted.