Captain N: The Game Master is an American animated television series that aired on U.S., Canada, Mexico, United Kingdom, Ireland, Austria, Australia (where it was called 'Captain Nintendo') and New Zealand television from 1989 to 1993.

In the U.S., the show aired as part of the Saturday morning cartoon lineup on NBC. The show incorporated elements from many of the most popular Nintendo games of the time. There was also a comic book version by Valiant Comics, albeit only featuring characters from Nintendo-produced games.

The hero of the series, Kevin Keene, a teenager from Northridge, California and his dog, Duke, are summoned to another universe known as Videoland by being sucked into a vortex that formed in his television, called the Ultimate Warp Zone. In order to fulfill an ancient prophecy, Kevin is to become the hero "Captain N: The Game Master" and save Videoland from the evil forces, led by Mother Brain (the chief enemy in Metroid), who has almost succeeded in capturing the Palace of Power and conquering all Videoland.

Kevin, armed with an NES Zapper and a belt buckle shaped like an NES controller and Duke appear suddenly on the other side of the Ultimate Warp Zone before the N Team, which consists of Princess Lana (the ruler of Videoland), Simon Belmont (the hero from Castlevania), Mega Man, Kid Icarus (from Kid Icarus, known in the actual games as "Pit"), none of whom show any confidence in Kevin's ability in the beginning. After Lana is kidnapped by the enemy shortly after Kevin's arrival, the reluctant group puts their differences aside to go on a rescue mission where Kevin eventually gains the others' confidence.

In most episodes, the N Team's enemy is a group of video game villains usually led by the boisterous and loud Mother Brain who is accompanied by her minions; the sheepish Eggplant Wizard (Kid Icarus), the thuggish King Hippo (Mike Tyson's Punch-Out!!), and scheming Dr. Wily (Mega Man). Mega Man was known for using the word "mega" at the start of each sentence. A 'villain of the week' is featured in some episodes when a particular game becomes the setting (such as Malkil of Wizards and Warriors). The original Donkey Kong also makes an appearance as a territorial, belligerent, Godzilla-sized gorilla in some episodes, but usually serves as a dangerous neutral character posing a hazard to friend and foe alike.

Further recurring characters make an appearance as both friend and foe. The Count (Castlevania) makes multiple appearances, along with Dr. Light (Under his mistranslated name of Dr. Right), Link and Princess Zelda (Similar to their appearances from The Legend of Zelda cartoon were transplanted from The Super Mario Bros. Super Show, also produced by DiC Entertainment, together with the original voice actors Jonathan Potts, Cynthia Preston and the late Len Carlson reprising his role as Ganon.), and, from season two onward, Game Boy (a childish, person-sized supercomputer shaped like the Game Boy, which had the power to materialize objects from his monitor) joins the N Team.

The focus of the show is mostly action-adventure sourced from the video games they parody, with comedic relief forming in each characters' interactions with one another. Sometimes, humor also stemmed from the loose interpretations of the laws of reality that apply in Videoland.

The idea for the animated series originated in a 2-part short story published in Nintendo Power magazine volumes 3 and 4.

The story was about Brett Prell, an employee of Nintendo of America who had super powers as a result being fused with high tech microchips that reacted to hot coffee. He was able to bring video game characters to life, as well as alter his clothes to appear like gaming spites such as Samus Aran's high jump boots. However his powers had a downside, as they caused Mother Brain and Ganon to cross over into the real world. With his new powers, Brett was called "Captain Nintendo". The story ended where Mother Brain had been damaged by Captain Nintendo and went into hibernation to recover. Brett resolved to himself that when Mother Brain awoke, she would lose, not just by him, but through all gamers who believed in the morality of Nintendo. 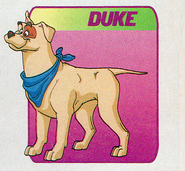 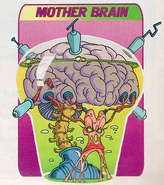 Retrieved from "https://nintendo.fandom.com/wiki/Captain_N:_The_Game_Master?oldid=458918"
Community content is available under CC-BY-SA unless otherwise noted.