Captain Louie is a character in the Pikmin series who first appeared in Pikmin 2 for the GameCube. He is Olimar's assistant, and is considered to be clumsy, and always hungry. In his first appearance, he was a playable character alongside Captain Olimar, and the player could switch between the two characters at almost anytime in the game while out on the field or in a cave so as to be able to divide their forces to accomplish things that would be hard, or even impossible to do for just Olimar alone. Also he can be used in multiplayer mode of Pikmin 2 as the second player's character.

First mission and departure to PNF-404

Louie's first mission for Hocotate Freight was to transport a shipment of valuable Golden Pikpik Carrot. He was supposedly attacked by a ravenous space bunny, and the carrots were eaten even if it is revealed in a secret cutscene called Louie's Dark Secret that he is the one who ate all the golden pikpik carrots. The President of Hocotate Freight took out a giant loan to cover the losses of the carrots, and had no way to repay the loan other than sell off company assets. The only available asset was Olimar's ship, the S.S. Dolphin. Because of this, it was immediately claimed on Olimar's return to Hocotate from having just rebuilt it on PNF-404. Learning that the Dolphin was sold to cover the debt, Olimar was so shocked he dropped a souvenir for his son: a bottle cap. As it rolled to a stop at Louie's feet, an old ship commonly called The Hocatate Ship was able to use its Research Pod to suck up the rusty bottle cap. The Pod proclaimed the piece of salvage to be worth one hundred Pokos, which lowered the debt to 10,000 Pokos. The President instructed Olimar and Louie to head back to the Planet of the Pikmin to search for treasure and save the company from going bankrupt.

As Olimar and Louie head to the Valley of Repose, the snow blurs the former's vision, causing him to clip a tree branch. When this happens, Louie falls out of the cockpit, leaving Olimar alone. After making contact with the Ship, Louie sets off to return to Olimar at the landing area. On the way, he discovers a Red Onion and cultivates Pikmin sprouts. He can then reach Olimar through the use of the newly-sprouted Red Pikmin, and then proceed to find the Courage Reactor, the first treasure of the game, while Olimar's field notes on the enemies are helpful, Louie's are nowhere near helpful, as they give tips on how it is best to eat said creature. The debt is eventually paid off throughout the game, treasures being found by the two captains in the Awakening Wood and Perplexing Pool as well as The Valley of Repose. After collecting 10,000 Pokos worth of treasure, Olimar blasts off from the planet, noticing too late that he left Louie behind.

Olimar and the President of Hocotate Freight return to the planet to find Louie. Louie aimlessly wanders around the planet for a bit, as seen in the credits roll of the game. Olimar and the President later find him in the Wistful Wild, hidden deep in the Dream Den with the Titan Dweevil. They rescue him by defeating the creature and send him to the Ship's treasurehoard (since the cockpit is already full), naming him the King of Bugs.

Louie is first found in Twilight River. After the Winged Pikmin lift a stick from the water a transmission is received. He is shown standing on a large tree stump and is mistaken as Captain Olimar by the three captains due to a bad signal. He is later found unconscious on the tree stump before being abducted by the Scornet Maestro's swarm. He is freed when his captor is killed and must be carried back to the S.S. Drake, which displays him similarly to a newly obtained treasure like in Pikmin 2, labeling him "Hocotatian." He wakes up in the early hours of the morning and mistakes the rescue as a kidnapping. So to save himself, he lands the ship in the Garden of Hope, steals all of the juice and runs away, followed by a large explosion. The explosion destroyed a wall and opened a large part of the area. Louie is found unconsious once again after defeating the Quaggled Mireclops, along with the remains of The Hocotate Ship. When carried back to the Drake, he is again displayed like a treasure, but this time labeled "Food Thief". Afterwards, he is kept tied up in the S.S. Drake to keep him from running off with the juice a second time. Once retrieved, he floats around in the Drake like Charlie's rubber ducky.

In one of the game's endings, it is revealed by Alph that Louie was once again left on PNF-404.

"Louie is back! Somehow, he survived a horrific ordeal with a freakishly large, weapon-wielding titan dweevil! I entered a hole with an army of ferocious Pikmin, grimly determined to save Louie from the titan dweevil, but it seems that he was perfectly fine all along. I can't understand how he managed to avoid being eaten. Hmmm... He's always had an unusually close connection with insects, and I know he loves to cook them! Maybe he wasn't kidnapped after all... Could he have been controlling that beast all along?! No... that's craziness! Although... he does insist now that we address him by his 'proper title', the King of Bugs."

"A new employee of Hocotate Freight, Louie is often silent. Nobody knows what thoughts lurk in his mind. He appears to operate on the same wavelength as insects, often with dangerous results. After he was kidnapped, he somehow managed to hijack a colossal insect's brain!"

Louie is a trophy and a sticker in Super Smash Bros. Brawl for the Wii. Its trophy description is as follows:

"A new Hocotate Freight employee. Louie is responsible for Captain Olimar having to venture back to the Pikmin planet. On his first delivery, Louie was supposedly attacked by a space bunny that devoured his whole lot of Pikpik Carrots. Pushed to the verge of bankruptcy, Hocotate Freight takes out an enormous loan that Louie and Olimar set out to pay back."

It is revealed in the unlockable footage "Louie's dark secret" that he was the one who ate the Golden Pikpik Carrots, and not a giant space rabbit. 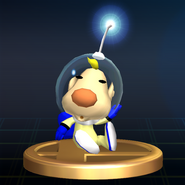 Super Smash Bros. Brawl trophy.
Add a photo to this gallery
Retrieved from "https://nintendo.fandom.com/wiki/Captain_Louie?oldid=521739"
Community content is available under CC-BY-SA unless otherwise noted.