Fire Emblem: Shadow Dragon and the Blade of Light

Camus is first chronologically encountered during Princess Nyna's escape attempt in BS Fire Emblem. He prevents Nyna's retainers from securing an escape route from the Grust army. After he defeats Midia, he talks with Nyna, and explains that she must live for now, to ensure that Archanea survives in the future. He later captures Rikard and his gang of thieves when they try to rob the Archanean Palace, however Nyna and Lena, both plea for Camus to spare the thieves, and help the suffering people of Archanea.

Eventually, Emperor Medeus grows tired of Camus delaying handing Nyna over to Dolhr custody, and orders his forces to take Nyna by force. Camus learns of this plot, and arranges to have Nyna delivered to Prince Hardin of Aurelis. With his loyal knights, Belf, Robert, and Raiden, Camus secretly escorted Nyna to Hardin. However, his plot was discovered by the Dolhr army, and he was imprisoned for assisting Nyna. As he was sent to prison, he hoped that Nyna would bring a new light to the world.

Camus was spared from execution by the intervention of his liege, King Ludwik, and returned to his duties as leader of the famed Sable Order. When Prince Marth invades Gra, Camus gives him a Thoron tome which belonged to the royal advisor Boah.

When Marth attacked the Grust homeland, Camus led the defenses against the Archanean League. Nyna pleaded with Camus to surrender and join her side, but his loyalty to Grust and the royal family was unwavering. He told Nyna to live her life to the fullest, and battled Marth.

Even though Camus was defeated by the Archanean League, the knight himself just barely managed to escape death. Unable to face his shame of defeat, Camus left Grust on a ship headed to a foreign land to reinvent himself. Along the way, the ship was hit with a powerful storm, and sank during the night causing Camus to be swept overboard.

Eventually, Camus surfaced on the shores of the Kingdom of Rigel, the most powerful kingdom on the continent of Valentia. When the locals discovered him, Camus was delivered to the Rigelian priestess Tatiana, who nursed him back to health. When Camus recovered from his coma, he appeared to have a severe case of amnesia, as he could no longer even remember his very own name. Yet despite this, Tatiana continued to look after Camus, and eventually the two fell in love.

When Emperor Rudolf of Rigel heard about this mysterious man, he summoned Camus and Tatiana to his castle so that he could meet this strange man. After a brief meeting, Rudolf became so impressed with Camus, he awarded him the name Zeke, and appointed him as a high ranking general in the army.

As time passed, Rudolf began to confide in Zeke, and told him the story of his long lost son Alm. While Rudolf's era was coming to a close, Alm had the power to save Valencia and start a new golden era for the people. If Zeke ever saw a young man with a cross shaped birthmark on his right arm, he must dedicate his life to him. Zeke swore to honor this request, and continued serving as a loyal knight to Rudolf.

When Emperor Rudolf invaded Sofia, Zeke was forced to participate in fighting the Sofians after General Jerome and Lord Nuibaba took Teeta hostage. When Alm's army saved Teeta, Zeke betrayed Jerome and helped Alm defeat the dastardly general. Once the battle was finished, Zeke discovered that Alm was the young man whom Rudolf had told him about, and joined his army post haste.

After Duma was defeated, Zeke regained his memories of being Camus but never told anyone. When the timing was right, he left Valentia, however Tatiana knew that he would return someday.

Camus returned to Archanea, hoping to tie off all the loose ends of his past life. He donned on a mask, took the name Sirius and traveled across the land. When he arrived in Macedon, he learned that the Prince Yubello and Princess Yumina of Grust were being guarded by the mercenary Ogma, and rushed to help them. When he met with Ogma, he helped the children meet Prince Marth, and then killed the Vikings terrorizing the villager. With the children safe, Sirius joined Marth's army as a powerful Paladin.

When the army arrived at the Dragon's Table, Sirius rushed out to save Nyna. He explained to her that Hardin still lover her, and that she had to move on and live a happy life. With Nyna safe, Sirius left Archanea for the last time and returned to Tatiana's side.

Camus appears in Fire Emblem: Awakening as a SpotPass Einherjar, being a member of the Others group. He also plays a minor role as an Einherjar in the Rogues and Redeemers DLC storyline.

Camus from the DS games. 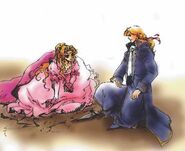 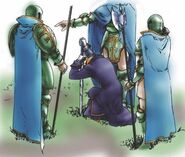 Camus' artwork from Fire Emblem: Shadow Dragon.
Add a photo to this gallery
Retrieved from "https://nintendo.fandom.com/wiki/Camus?oldid=592312"
Community content is available under CC-BY-SA unless otherwise noted.