Burnout is a racing video game ported to the GameCube system by Criterion Games, released in the spring of 2002 and also as a launch title for the platform in the PAL regions. It was originally developed for the PlayStation 2 console back in 2001 with a GameCube port arriving six months later. [1]

Designed with the developer's RenderWare engine, one of the main gimmicks of the game is the heavy incorporation of crashes on the race track, along with the addition of automated traffic on the race tracks which have to be avoided. The game comes with a plethora of different gameplay modes as well for extra replayability.

Due to the game's success, it was followed up with a sequel in 2003 named Burnout 2: Point of Impact. 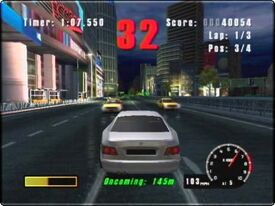 Whilst serving as a racing game, Burnout is not a run-off-the-mill racing title and offers much in gameplay. It operates on a risk reward mechanic with the use of crashes as the standout gimmick, with racers not only speeding through the tracks at high speed but also crashing onto opponents and avoiding oncoming traffic.

Another feature of this game is the turbo bar placed on the bottom left corner of the screen. To encourage risk and likelihood of crashes, this bar fills up whenever the player drives on the wrong side of the track with oncoming traffic, drifting through sharp bends and glancing closely past the rival drivers. When maxed out the car will unleash itself on a burst of turbo boost.

This brings up the main gimmick of the game - crashes.  They are an integral part of the game's design, and are captured in graphic detail through instant replays for the player to watch. Multiple pile-up of cars are bound to occur throughout the race track; after crashing, replacement cars are immediately spawned to continue driving.

The game features 14 different tracks at day and night in six unique locations across American and European continents, along with four unlockable cars. [2]

There is a large selection of different modes to play from:

The game received strongly positive reviews from the critics, securing a solid 78% average score on Metacritic's score measure. One of its main highlights was its gimmick feature of spectacular crashes leading for an addictive experience, with GameSpot [4] writing that "just when you think you've seen them all, a minivan will be left spinning on its roof like a top or a compact will shoot straight up into the sky. As amazing as the physics engine is, the small details applied to the wrecks are what really make them a joy to watch."

The sensation of high-energy speed in the race was also praised as well as the tight controls, with IGN commenting that "the first time you get two burnouts in a row, it's an adrenaline rush. This is where the break-neck speed and control come together beautifully, making the experience all the more worthwhile."

However, the downsides were the game's soundtrack, described by IGN as "decidedly trendy and certainly extreme" but that "the songs' styles just seldom fit in" along with its replayability which GameSpot picked upon, stating that "you're left with a game that can easily be completed in a day. With 14 tracks and just a few hidden cars to unlock, it offers very little in the way of replay value."

Retrieved from "https://nintendo.fandom.com/wiki/Burnout?oldid=538177"
Community content is available under CC-BY-SA unless otherwise noted.