Blue Toad is a Toad in the Mario series. He is commonly paired with Yellow Toad.

In New Super Mario Bros. Wii, Blue Toad and his partner were celebrating Princess Peach birthday party until they were ambushed by Bowser Jr. and the Koopalings. Peach was then quickly squashed and captured. The Mario Bros. and the Toads set off to rescue her. 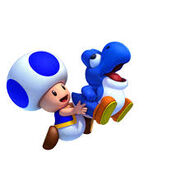 With a Propeller Mushroom Power-Up.
Add a photo to this gallery
Retrieved from "https://nintendo.fandom.com/wiki/Blue_Toad?oldid=527879"
Community content is available under CC-BY-SA unless otherwise noted.