Black Mage is a common job class in many RPGs, but mainly in the Final Fantasy series. They are known for casting black magic, hence their name. The most commonly used and well known black magic spells are Fire, Fira, Firaga, Blizzard, Blizzara, Blizzaga, Thunder, Thundara, and Thundaga. Their magic revolves around exploiting enemies' elemental weaknesses, but some of them are less common than the Fire, Blizzard and Thunder spells such as: Bio, Water, Aero, Quake, Drain, Osmose, Sleep, Toad, Break, Death, Flare, and Ultima, the most powerful black magic spell in many games. Notable Black Mages include Palom from Final Fantasy IV and Kytes from Final Fantasy XII: Revenant Wings. They most often wield rods and staves, and sometimes maces.

Black Mage is one of the six starting jobs and it eventually changes to Black Wizard after advancing in the story.

Anyone can be a Black Mage and it is available very early on.

Humans, Moogles, and Nu Mou start off with the Black Mage job available.

A Black Mage from the Final Fantasy series also makes an appearance in this Mario spin-off game that was developed by Square Enix.

Black Mage is a playable character in Mario Sports Mix. To unlock him, you need to beat Star Road 3 times, or by beating the Star Fup 4 times. His high stat is technique, while his other states are pretty low, he is a tricky person! 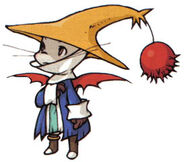 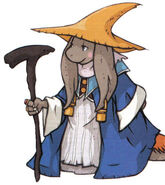