Big the Cat is a character in the Sonic the Hedgehog series, and one of Amy Rose's good friends. He made his debut in Sonic Adventure, which was then later released on the Nintendo GameCube as Sonic Adventure DX: Director's Cut. He is a fisherman, who seems to enjoy the simple life at the Mystic Ruins, living alongside Froggy, his best friend. His strength matches his large size, but he is still very kind and humble towards his friends. 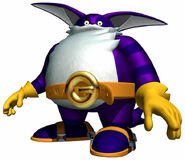 Sonic Channel.
Add a photo to this gallery

This Sonic the Hedgehog related article is a stub. Please help by expanding it.

Retrieved from "https://nintendo.fandom.com/wiki/Big_the_Cat?oldid=534138"
Community content is available under CC-BY-SA unless otherwise noted.