Above the main platform are three mini ones, it is currently unknown if you are able to break these platforms like you can in other levels, though you probably won't be able to, seeing as the director said nothing odd would happen. When you are on the mode Multi-Man Brawl, you fight the Alloys on this stage. The stage itself is a large hovering land mass that is far above the ground. A large machine type thing seems to be keeping it above.

The following are four screens displaying four different times of day. In the first screen it is obviously day time, the second one is in the evening, and the sky has changed from a blue to a bright orange, after this the moon will go above and the stage will be darker, thus meaning its night, after this morning will start over. 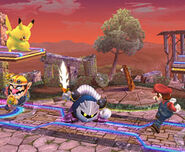 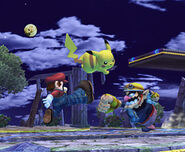 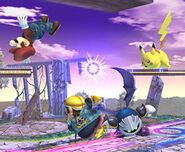