The Barrel Train is Diddy Kong's lightweight special vehicle in Mario Kart: Double Dash!!. This vehicle can be unlocked via completing the Star Cup in 150cc.

This vehicle is modeled after a train with barrels as the name implies. While it's not nearly the heaviest of all karts, it is still the heaviest of the lightweights. Since it is a small kart, two small characters are only able to ride the vehicle.

The Barrel Train reappears in the Nintendo 3DS title Mario Kart 7 as a top part of the kart customization. It is remodeled in this game to remove the green part, thus only allowing access to one player. It has Handling as its disatvantage.

This vehicle appears as a sticker in Super Smash Bros. Brawl. It allows leg attacks to be increased by nineteen in terms of power.

In the 3DS version of Super Smash Bros. for Nintendo 3DS/Wii U, this kart in its Mario Kart 7 rendition appears driven by Donkey Kong in a trophy. The kart also has the Swooper Glider.

Mario Kart: Double Dash‼
Add a photo to this gallery

Diddy and Bowser Jr. riding the Barrel Train in Peach Beach.
Add a photo to this gallery 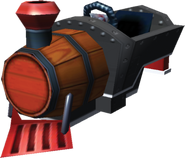 Mario Kart 7 artwork.
Add a photo to this gallery
Retrieved from "https://nintendo.fandom.com/wiki/Barrel_Train?oldid=516493"
Community content is available under CC-BY-SA unless otherwise noted.