Start a Wiki
watch 01:31
The Loop (Games)
Do you like this video?
A Barrel Cannon (Barrel Kannon in Donkey Kong Country 2: Diddy Kong's Quest) is a type of barrel in the DK series that acts as a cannon, as the name suggests. There are different variations of Barrel Cannons, but they all share the same function of shooting Kongs out of it as a means of transportation. All Donkey or Diddy has to do is hop inside it, and depending on the kind of Barrel hopped into, it will either shoot the automatically, or will shoot when the player presses a certain button.

In Donkey Kong 64, the player must do something a little differently to get in the barrel. He must stand on a platform with DK's face on it, and press the "Z" button. Donkey Kong (character) will be launched into the air and into a Barrel Cannon. The player must then aim correctly to get to the other barrels and complete the trial.

Auto-Fire Barrels (or Blast Barrels), are the most common and most favored type of Barrel Cannons. They first appeared in Donkey Kong Country and have been in most DK games since. They are basically what their name implies, cannons that fire automatically. Almost as soon as a Kong hops in, they are blasted out in a direction and distance unknown to you until it has already fired you. They are very common barrels, and they take place in many levels. They are quite useful when it comes to getting to a bonus room, getting across a level quickly, or finding random hidden shortcuts around DK Island.

Auto-Fire Barrels are seen in the trailer for Donkey Kong Country Returns.

These Barrels launch the Kong inside in the direction of the arrow. You can control and aim the barrel using the control pad. You must do this quickly though, as these barrels are timed to ignite at a certain time. They may launch you a totally different direction fom where you wanted to go.

These are one of the most common types of Barrel Cannons. They are ignited by pressing the "A" button, so you can stay in the barrel as long as you need. These are usually moving around, though, so pressing "A" at the right time can prove to be difficult on some levels. These are used in quite a few levels, and some bonus rooms and shortcuts.

A very large version of an Auto-Fire Barrel is seen in the DK Mountain course. Once the player drives into it, they are fired at high speeds util they reach the top of the mountain, where they slow down and do it again on the next lap. 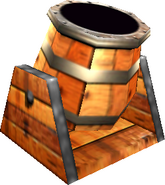 Donkey Kong 64
Add a photo to this gallery
Retrieved from "https://nintendo.fandom.com/wiki/Barrel_Cannon?oldid=436751"
Community content is available under CC-BY-SA unless otherwise noted.