Bard is a playable job class in the Final Fantasy and Fire Emblem series. Their abilities include allowing allied units to take another turn in the Fire Emblem series (making them just like Dancers in the series) and using their songs to raise allies' stats.

Elphin, a Bard from Fire Emblem: Fūin no Tsurugi, in battle.

Nils, a Bard from Fire Emblem: Rekka no Ken, in battle. 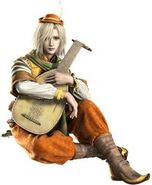 Bard from the Final Fantasy series.
Add a photo to this gallery

Retrieved from "https://nintendo.fandom.com/wiki/Bard?oldid=523245"
Community content is available under CC-BY-SA unless otherwise noted.