Balloon Fighter is the protagonist of Balloon Fight for the Nintendo Entertainment System. He is a young man with balloons attached to his back. The character would later make plenty of cameo appearances in games such as in the WarioWare series, Super Smash Bros. Melee, Tetris DS, and Animal Crossing.

In the game, Balloon Fighter battles a number of unnamed enemies wearing masks with beaks, around a number of floating platforms above the sea. The Balloon Fighter has to pop the balloons that were tied to the enemies’ backs, while trying to keep the enemies from doing the same to him. However, he has two balloons unlike the enemies. The enemies only have one balloon each, and when they are popped they parachute down to the ground below (if there are no platforms they fall in the water and drown). While on the ground, they start to pump up a new balloon, but if Balloon Fighter can run into them before they have pumped up the balloon they are defeated. After defeating all the enemies, Balloon Fighter moves on to the next level. Apart from the enemies there are flippers in the arena that can make movement difficult for Balloon Fighter. There are also thunder clouds which can throw out lightning balls that bounces around the arena and is deadly if it hits Balloon Fighter. Finally, there is a fish living in the water who will try to eat anyone who gets too close to the water surface.

In the Balloon Trip mode, Balloon Fighter tries to fly as long as only is possible without getting eaten by the fish, or touching one of the many lightning balls that appear on the sky.

In later games in the series, Balloon Fighter is replaced. In Balloon Kid, Alice was the protagonist and Tingle took his place in Tingle's Balloon Fight. However, in Nintendo Land, the player's Mii wears a costume which looks similar to the Balloon Fighter

The goal in Balloon Fight is to break your enemy's two balloons, depriving him of his flotation devices. If you lose one balloon, your buoyancy drops and it becomes harder to rise. As you can pop both friends' and enemies' balloons, you have to stay alert in this two-player fun fest. The balloonist's name is unknown. 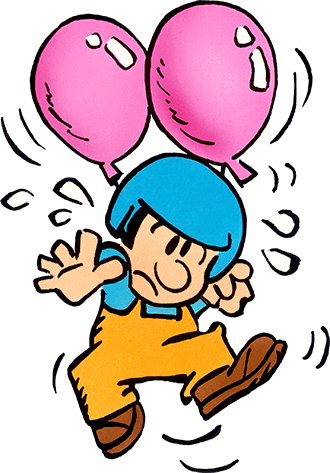 The sticker in Brawl.

The enemy's sticker in Brawl.
Add a photo to this gallery
Retrieved from "https://nintendo.fandom.com/wiki/Balloon_Fighter?oldid=517536"
Community content is available under CC-BY-SA unless otherwise noted.