Baal, also known as the Empress of the Fathoms is a Demon that usually hide her true appearance behind that of a gigantic toad-like creature. Under her toad form, Baal is unable to move properly so she uses her seemingly endless spiked tongue to harm and consume her enemies.

Baal is featured as a summon in Bayonetta 2. She is summoned once during the story as a mean for Bayonetta to finish off the Belief fought in chapter II. Outside of this, Baal is mostly featured during the Umbran Climax and especially when using Alruna but also during certain combos of Love is Blue. She is also featured during the Torture Attack of Resentment.

"A royal inhabitant of Inferno. Concealing her form under most circumstances, she appears as a gigantic toad when summoned.

Baal's enormous, wobbly body is too heavy for her to control, giving her a disadvantage in the heat of battle; however, she possesses an endlessly extending tongue that can reach the far ends of the battlefield and swallow up opponents within an instant." 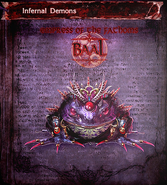 Baal's page in the Book of infernal Demons.
Add a photo to this gallery
Retrieved from "https://nintendo.fandom.com/wiki/Baal?oldid=527354"
Community content is available under CC-BY-SA unless otherwise noted.