Azala is an enemy found in 65,000,000 B.C. in Chrono Trigger. She is the ruler of the Reptites and other prehistoric creatures.

Azala steals the Gate Key from Kino and disappears.

Crono and his party go searching for the stolen Gate Key and enter the Reptite Lair, where they find Azala. She then unleashes Nizbel on them.

Nizbel is defeated and Azala becomes frightened of their strength. She unwillingly hands over the Gate Key and flees.

Note: This is only Azala's first appearance. The player doesn't actually fight her until later in the game.

Crono and his friends enter the Tyrano Lair only to be attacked by numerous prehistoric creatures. Fighting their way through the castle, they make it to the upper levels to find Azala, who unleashes the Black Tyrano on them. As the battle begins, a bright red star is seen in the sky.

When the battle ends and Azala and the Black Tyrano are beaten, Azala explains that the star will crash down to earth ushering in a long ice age. Ayla mentions that in her language, "La" means fire and "Vos" means big. They soon realize that Lavos is the entity that's crash-landing on earth. Lavos descends from space in the Prehistoric era.

Kino arrives with the Dactyls to rescue Crono's party just before Lavos crashes down on the Tyrano Lair. Azala is killed in the crash. 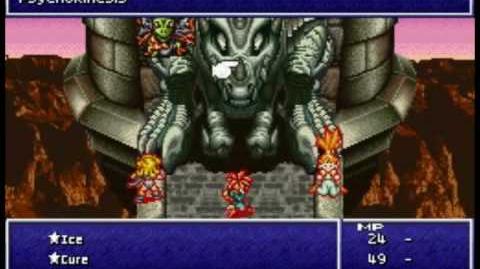