Ardor are third sphere principalities which are on the seventh rank of the hierarchy of Laguna, the chain of command of the Angels of Paradiso. They are similar to angelic knights with their red armor, their sword and their segmented shield. Ardor are said to symbolise the notion of protection and as such they protect the masses from evil spirits.

They are often seen comanding groups of Affinity or Applaud in battle. Groups of Ardor without any other types of Angels can also be fought in some cases.

"The highest ranking member of the Third Sphere, Ardor are christened with the rank of Principalities. Presiding over the protection of the masses from evil spirits, they are equipped with a shield and armor of proof. Wielding the power of Paradiso on those who encroach upon happiness, Ardor are recipients of much adoration from those seeking salvation." 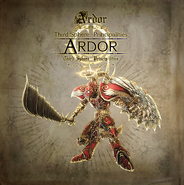 Ardor's Page in the Hierarchy of Laguna book.
Add a photo to this gallery
Retrieved from "https://nintendo.fandom.com/wiki/Ardor?oldid=443187"
Community content is available under CC-BY-SA unless otherwise noted.