Fire Emblem: Shadow Dragon and the Blade of Light (1990)

Anna (JPJapanese: アンナ) is a recurring character in the Fire Emblem series; appearing in every game except for Fire Emblem Gaiden and its remake, which doesn't use shops. She appears as a red haired female and is rarely seen without her trademark pose (of her resting her pointer finger on her face) or her sly smile.

Anna appears to be able to travel between the worlds of each title; Fire Emblem Awakening reveals there are a multitude of Annas, one managing the Outrealm Gate and another a recruitable Trickster.

Anna is traditionally a non-playable character who appears throughout various Fire Emblem games as a guide, cameo, prompt for suspending map data, or merchant in one of the Secret Shops.

In Shadow Dragon, Anna first appears as a Archanean villager in palace town. In this game, Anna has a close relationship with Jake, a drafted soldier who worked for the Grust army, a man occupying the country. Not wanting Jake to be hurt by the Archanean League, Anna told Caeda to tell Jake to quit fighting as she's worried sick about him.

In Fire Emblem: New Mystery of the Emblem, Anna returns to cheer on Jake. They resume traveling the world in their ending.

In Fire Emblem: Genealogy of the Holy War, Anna appears as a villager in Leonster in Chapter 7, revealing she's worried about Jake going off to fight against the Grannvale Empire. In Chapter 8, Jake is rescued by Amid, and Linda, with the reunited couple saying they'll name some children after the two.

In Path of Radiance and Radiant Dawn, Anna hosts the in-game turorial and is depicted as a Pegasus Knight, though, she doesn't ever attack.

In the Fire Emblem GBA games Anna appears in the Link Arena and also in the prompt before game data is erased.

In Awakening, multiple characters named Anna appear. They are identical sisters who are all traveling merchants. Thought the game Annas appear in locations and sell special items.

Anna returns again in Fire Emblem Fates and act as the keeper of the Dragon gates as well as being playable once again after being recruited during Xenologue 10.

In Fire Emblem Heroes, Anna plays a vital role in the story. As a commander of the Order of Heroes, she summons the Summoner, who later becomes the tactician of the army, and entrusts them with the legendary relic, Breidablik to fight and protect the world of Zenith from the Emblian Empire. In this game Anna is a Axe user and bears the title of Commander.

Anna appears as a merchant in this game. She can also be unlocked by completing Anna's Challenge.

Anna appears as a shopkeeper at Garreg Mach. She can be recruited after buying the necessary DLC.

With nary a word, Anna left the others and returned to her free-spirited merchant life. She was later sighted across the continent, haggling with suppliers and beating down the cost of goods.

Many wrote of Robin's legendary exploits, but accounts of his origins and character varied. Scholars, poets, and bards agreed on one thing alone—he loved his wife, Anna, above all else.

Anna returned to merchant life, revitalizing trade in parts of the world most affected by the war. Official records show how her network and name were passed down to the next generation.

Avatar was hailed as a hero, working alongside his spouse to spread peace worldwide. His wife, Anna, continued to travel the world as a merchant. It is said the two were very much in love.

The two spent the rest of their lives together, Avatar ruling as the wise King of Valla. His wife, Anna, continued to travel the world as a merchant. It is said the two were very much in love.

Anna's business savvy proved to be a great asset in the post-war reconstruction of Garreg Mach. Once the restoration was complete, she disappeared from the area entirely, though tales of a mysterious merchant were passed down in every corner of the world for centuries to come. Some say she continues her travels even to this day, eternally peddling her wares, and ever in search of the next lucrative opportunity.

In the Nintendo 3DS version of Super Smash Bros. for Nintendo 3DS/Wii U, Anna appears as a collectible trophy.

Anna is illustrated in the card game with the following cards 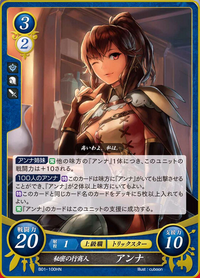 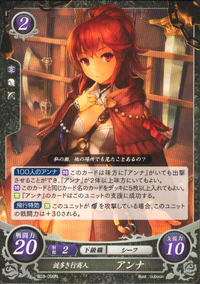 Retrieved from "https://nintendo.fandom.com/wiki/Anna?oldid=525928"
Community content is available under CC-BY-SA unless otherwise noted.