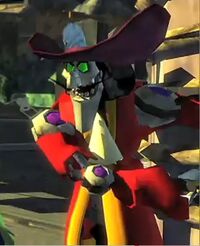 The animatronic version of Captain Hook is the third boss based on Captain Hook from the movie Peter Pan in Epic Mickey. He has captured the Sprite to keep Pete Pan from flying.

Captain Hook is found in the Jolly Roger in Skull Island. When Mickey gets to the ship, Hook will try to stop him. Mickey has three options:

Mickey must avoid Hook's shots and go to the mast. Hook will try to stop Mickey and he must paint the flags and lower the sandbags. Hook will also shoot Thinner to stop Mickey. Mickey will know the Sprite is in her cage. If Mickey breaks it, the Sprite will rescue Pete Pan and he will fight Hook.

Mickey must hit Hook and he will spin, taking some damage. Hook will stop Mickey by shooting Thinner. Mickey must thin the barrels. Hook will try to throw bombs and must be countered by his spin move. If Mickey uses Paint, Hook won't attack. After Mickey hits him several times, he will go on the plank. Animatronic Tick-Tock will chase Hook. This upgrades the Thinner Capacity.

Mickey must switch the lines and then hit Hook and then use the same strategy of Thinner Path A until Hook is into pieces.

Note: Mickey can still save the Sprite after defeating Hook, which makes Mickey receive both: Captain Hook and Hook vs. Pete Pan. However, Hook's bad ending will still play.

Retrieved from "https://nintendo.fandom.com/wiki/Animatronic_Captain_Hook?oldid=278409"
Community content is available under CC-BY-SA unless otherwise noted.