Nintendo
Register
Don't have an account?
Sign In
in: Females, Class B articles, Bayonetta characters,
and 4 more

Alraune, also known as the Whisper of Dementia and the Whisperer of Insanity, is a Demon that appear as a woman with monstruous traits. Alraune can change between two forms the second one being way more monstruous than her humanoid first one. Alraune originally was a noble woman who was reincarnated as a Demon after killing herself with a violent poison. By the time of Bayonetta 2, Alraune became a very powerful Demoness who claims to be the Queen of Inferno and is the one who steals the soul of Jeanne after she is dragged to Inferno.

A glimpse of Alraune is first seen soon after Jeanne's soul is dragged to hell. Bayonetta eventually reach Alraune's vine palace and taunt the Demon who originally allowed the Umbra Witch to leave if she begged for her live. Bayonetta trash her palace instead and it is revealed that Alraune absolutely hate Madama Butterfly for something she did to her a few millenia ago and so the demon is determined to destroy Bayonetta and her contractor.

The alraune fights is the only part of Chapter XI and is divided in two phases. The first phase is against her humanoid form during which she mainly uses her sharp fingernails as a weapon. She can also summon demonic plants that shoots projectiles and she has the ability to drain Bayonetta's health by feeding on her soul if she grab her. The second form is a monstrous reptilian creature with Alraune's humanoid upper body. She can use her way bigger claws to deal melee attacks with a way bigger range. She can also use Jeanne's soul as a source of energy to perform magical attacks.

After defeating her and saving Jeanne's soul, Bayonetta tries to kill Alraune only to be stopped by Rodin who block the attack to turn Alraune into the weappon Alruna, which he promply gives to Bayonetta.

"A woman who doused herself in mandrake poison and took her own life as a means of getting revenge on the husband who left her. The poison continued through her skin and devoured her soul. Consumed by hallucinations, she was at last reincarnated in Inferno. Myth places her as the young daughter of a noble estate, but none of her past visage can be determined from her current demon form. She searches the bottom of hell for the most exquisite souls, then injects poison into their nerves to make them eternal "lovers" at her palace. Insatiable desire and obsession have painted her heart so thickly that she will never know peace. Not even with the sacrifices of a thousand souls, or a million..." 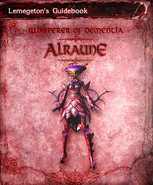