Romaji: Mahoippu) is a species of Pokémon in the series of the same name. It is a Fairy Pokémon introduced in the eighth generation games, Pokémon Sword and Shield. It evolves from Milcery after the player spins while Milcery is holding one of the Sweet item. Alcremie has 63 different forms, plus 7 shiny versions, as well as a Gigantimax form.

The form is determined by the following factors. 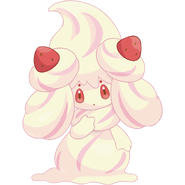 Alcremie's Gigantimax form.
Add a photo to this gallery
Retrieved from "https://nintendo.fandom.com/wiki/Alcremie?oldid=510629"
Community content is available under CC-BY-SA unless otherwise noted.