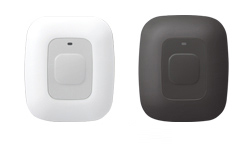 The Activity Meter is an accessory that comes included with the Nintendo DS video game Personal Trainer: Walking and Active Health with Carol Vorderman. Each copy of the game came with two Activity Meters, one white and one black. They were developed by the Nintendo Network Service Development Department. The Activity Meters are wireless pedometers that are used in conjunction with the video game. They record how many steps the player takes and places it in the game. With this data you are able to reach goals and put the data online (through Nintendo Wi-Fi Connection) so that you can reach the global goal of walking the length of the solar system (a combined total). Though the game comes with two Activity Meters, players can go out and purchase more if they want.

Nintendo of Europe expressed interest in a game that involved a pedometer, and sent the idea over to Nintendo in Japan. Creatures Inc. also had a similar desire too. The concept was then given to Network Service Development Department, the sole developer who works both with hardware and software at the same time (this fundamentality was common throughout Nintendo before the structure was changed by Satoru Iwata).

Development on the Activity Meter began around two years prior to the game's release. Around this time, the developers did some research on pedometers, and went to find how many were sold on a yearly basis in Japan. They found that it was around 4.2 million units each year. So, once they found this out, they knew they could start development on the actual product. Since pedometers no longer use mechanical switches to determine the amount of steps you take, they had to implement a shock sensor instead. This way, the pedometer could determine the amount of steps you've taken no matter which way it was held, whereas with a mechanical switch it had to remain upright. Shock sensors also have a low power consumption, which also contributed to the decision to use it.

After internal components had been decided, it was time to make a casing. The developers had to come up with a way to connect the pedometer to the Nintendo DS. Initially they thought of making use of the DS's Game Boy Advance slot, and make a cartridge that resembled a GBA cartridge, though was roughly twice the size of one. After you've done your daily routine, you could then place the cartridge inside the Nintendo DS's GBA slot and the information would be recorded in the game. The cartridge, however, allowed the internal components to be exposed to dust and perhaps even sweat, so they had to ponder a way to conquer this. They came up with the idea of folding the cartridge so that it would be resistant to such things, and thus the development team thought that they had a winner on their hands and were ready to start mass production when their plans when awry. The development team explained that they unexpectedly had to start from scratch.

The reason for this is simple. The game was planned to be release along a similar time frame to that of the Nintendo DSi. The new hardware didn't have a Game Boy Advance slot, and thus the software wouldn't be compatible with the new handheld. So, with this, they had to come up with an idea to transmit the data to the Nintendo DS without the use of a cartridge. The circuit group at the company then came up with an idea to use infrared, which would be cost effective and manageable since there wouldn't be much data to send to the DS. But, following this a new problem arrived, which was how they would fit an IR communications port in a DS cart, which is very thin. They went through much trial and error, and eventually managed to find an IR component that they could fit inside the DS cart.

Now, with the cart problem fixed, the developers went back to the Activity Meter and wanted to make the unit more resistant to water than the previous unit was. They made a new design for it, which was much smaller than the cartridge based pedometer they had made for the GBA slot. When they presented it to Masaru Shimomura, the person who oversaw the development of both the software and the hardware, he said that it was too big, despite being much smaller than what they had created previously. He wanted it to be even more compact since there wouldn't be an LCD screen. The omission of an LCD screen was chosen because the developers didn't want people to concentrate too much on it when they were walking, and instead would only allow them to see how many steps they took when the sent the information over to the software on the Nintendo DS. He also said that he "wanted to make something that people wouldn’t believe was a pedometer if you showed it to them." So the developers, for a second time, had to start over.

After they told them this, the circuit group started over once again and had to make it even smaller than before. So, after they made an even smaller unit, the casing designers made it so that it wouldn't be uncomfortable when you placed it in your pocket. They even ran tests to make sure it wouldn't hurt if someone with bare feet stepped on it. Beyond this, the circuit team also included a feature that isn't in other pedometers, which is allowing the user to see how many steps he/she took each minute.

After the Activity Meter was created, the developers decided to include two pedometers in each copy of the game. One for the owner, and one for someone else in the family, perhaps even their dog. So, with this, they had to test if the accessory would work with a dog. At first they placed the Activity Meter in a little bag and connected it to their dog, though the dog didn't appreciate it very much. So, they went back to the drawing board and created a clip that you could connect to the dog's collar. Because of its light weight, the dogs didn't even notice it. Next, they had to determine whether or not the pedometer would record the front paws, the back paws, or all four. In the end they decided it would record only the front two. Their final goal was to see if it would work with all types of dog breeds, so they went to a local dog park and tested it on twenty five different breeds, and it worked on all of them. They determined if it worked or not by taping all of the dogs via a video camera, then going back to the office and replaying it in slow motion to make sure that every step was accounted for.

Retrieved from "https://nintendo.fandom.com/wiki/Activity_Meter?oldid=485784"
Community content is available under CC-BY-SA unless otherwise noted.