Accolade are third sphere archangels which are on the eight rank of the hierarchy of Laguna, the chain of command of the Angels of Paradiso. Accolade is a centaur-like Angel who is headless and has its face in its humanoid torso instead. They are said to be weapon masters even by Paradiso standards and can wield effectively many types of weapons. They can even temporarily bestow one of their weapons to a very pious human hero to help them fight against the darkness.

Accolade is very similar to Applaud from the first game, they command groups of a lower ranked angels, Acceptance in their case, and can appear in groups to help a higher ranking Angel, Allegiance in their case. Their main difference is that Accolade are able to use a wide variety of weapons, something Applaud cannot do since they either have a spear or a bow. Accolade can wield a lance, greatswords, a hammer or shields.

"A large angel belonging to the Third Sphere, tasked with commanding the lowest ranking angels. Accolades are adept at using many of Paradiso's weaponry, including swords, hammers, and whips. They use these to instill fear in the hearts of all those who doubt the might of God. Accolades have long lived in legend; at times, they were said to have answered the prayers of the most devout followers by temporarily bestowing upon them one of these divine instruments." 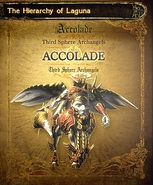 Accolade's page in the Hierarch of Laguna book.

The card of Accolade (A version)

The card of Accolade (B version)

The card of Accolade (C version)

The card of Accolade (D version)
Add a photo to this gallery
Retrieved from "https://nintendo.fandom.com/wiki/Accolade?oldid=516696"
Community content is available under CC-BY-SA unless otherwise noted.