Nintendo
Register
Don't have an account?
Sign In
Advertisement
in: Rated 3 by PEGI, Rated A by CERO, Class B articles,
and 15 more
English

1080° Snowboarding (テン・エイティ スノーボーディング) is a snowboarding video game for the Nintendo 64. It was released in 1998. The game was successful enough to warrant a sequel for the GameCube titled 1080° Avalanche.

1080° Snowboarding was developed by Nintendo EAD and published by Nintendo. In 1998 it was awarded the best sports game on a console award by the Academy of Interactive Arts & Sciences.

The Ice Man is heavier than human riders, which affects his handling. He'll stick to turns without sliding as much and, because of his weight, the Ice Man will land sooner when hitting a bump or ramp. Although his top speed is slower than some other riders, he can overtake any rider in the turns. Until you get the Gold Boarder or the Panda, nobody will beat this guy.

How To Unlock The Ice Man
To get the Ice Man, go to any mode from the Options menu and scroll to Akari Hayami. There are two levels of zoom on each character- one without player statistics and one with. Zoom in to the screen with the player's stats displayed. Press the yellow C-Left button, let go, and press the blue A button. If you did it correctly, you'll see a picture of the Ice Man in place of Akari's on the Board Selection screen. Now choose any board and any course and have at it!

The gold guy is a lot heavier than the Ice Man but with Dion Blaster's speed! He handles like a tank but is a little floaty in the turns. His standing jumps are a little low, but still, this boarder rips! Now go back and beat all your best times.

How To Unlock The Gold Boarder
To unlock the Gold Boarder, you must beat the game in Expert mode using the Ice Man (not hard). Once you've done that, go to the Rider Selection screen in any mode and view Kensuke Kimachi. Advance to Kensuke's statistics screen and press the yellow C-Up button. Now let go and press the blue A button. If you did it correctly, you'll see a picture of the Gold Boarder in the place of Kensuke's face on the Board Selection screen. Now choose any board and any course.

The Panda's handling is similar to the Ice Man's. He's a little slower but has a good edge control. He also makes some darn cute noises when you jump him, and even cuter ones when he lands on his bear butt. You can learn his special moves in Training mode.

How To Unlock The Panda
To unlock the Panda you must come in first place on all the courses in Time Attack and Trick Attack modes. After you beat all EAD's scores, go to the Rider Selection screen in any mode and view Rob Haywood. Go to Rob's statistics screen and press the yellow C-Right button. Now, let go and press the blue A button. If you did it correctly, you'll see a picture of the Panda in place of Rob's face on the Board Selection screen. Now choose any board and go to Training mode to learn those Panda tricks you were wondering about.

How To Unlock The Penguin Board
When you've stomped every trick in Training mode (all tricks are colored red), you can access the Penguin snowboard. Highlight the any character's default board at the snowboard selection screen, then press C-Down. Nothing will change on this screen, but when you go to race, you'll be riding a penguin.

1080° Snowboarding was announced during Nintendo's annual Space World show in Japan in the year 1997 in November along with a variety of other titles. A couple of months later a demo of the game was present at Nintendo's Gamer's Summit in January the next year. A month later it was released in Japan.

Some primary members of the team had worked previously on Nintendo's Wave Race 64, also a Nintendo 64 title that involves extreme sports. Some of the employees include the likes of Shigeru Miyamoto, Giles Goddard, and Colin Reed. The two series intertwined with the release of Wave Race: Blue Storm which featured characters from both of the video games. 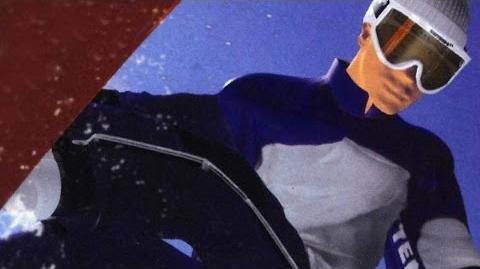