) until 2013) is a first party development studio owned by Nintendo which is comprised mostly of ex-Square designers and artists (pre-Enix merger).

They work on mainline, large-scale games for Nintendo's franchises such as Super Mario, Zelda and Animal Crossing.

The company was founded in June 2000 in Musashino City, Tokyo, Japan by many ex-Square staff during its then-processing merger with Enix. It was founded as a wholly-owned subsidiary of Nintendo, and released their first game, Magical Vacation for the Game Boy Advance in 2001 in Japan only, but their next title, Sword of Mana, was published by Square Enix in Japan in 2003 for the GBA.

Since launch, the company has developed and co-developed games published by Nintendo, while some are published by third-party companies including Square Enix, AQ Interactive, and Marvelous. It has worked on Mother 3 in 2006, Heroes of Mana in 2007, Professor Layton and the Last Specter in 2010, and Super Mario 3D Land in 2011.

On February 1, 2013, they restructured into 1- UP Studio and relocated to Chiyoda-ku, Tokyo, Japan. Since then, it has worked on several games for Nintendo's IPs, mainly the Super Mario series, as well as games such as Ring Fit Adventure and Animal Crossing: New Horizons. In 2020, they moved into Kanda Square with the other Nintendo Tokyo teams, Game Freak and HAL Laboratory 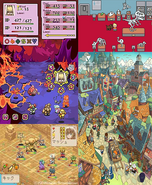