Nintendo
Register
Don't have an account?
Sign In
Advertisement
in: Class A articles, Articles marked for cleanup, Mario items,
and 7 more

This page or section may need to be cleaned up due to improper organization of edits.
This may involve correction of spelling and grammar, and revising sections to ensure they are clear and concise.

The 1-Up Mushrooms first appear in Super Mario Bros. In this game, they have green spots on a yellowish-orange mushroom cap. They are usually found in Hidden Blocks or in areas where Mario must risk his life to acquire one. They are rather uncommon in this game; the ones in the worlds' first levels can only be earned by grabbing all the coins of the previous world's third course. In World 1 and World 8, however, there are two hidden 1-Up Mushrooms, more than Mario can find than any other world in the game.

While 1-Up Mushrooms are present in Super Mario Bros. 2, these versions are also simply known as 1 UPs[1] and look very different from the usual green-capped mushrooms. Found by pulling up a plant containing one or throwing three items at a bubble containing a 1 UP (in Super Mario Advance only), they have a solid red cap with "1 UP" written on their side, rather than having eyes. As usual, they grant an extra life.

1-Up Mushrooms reappear once again as rare mushrooms that can be found in hidden blocks or in risky places in Super Mario Bros. 3. Their behavior has not changed much, but they now have light-blue or green-spotted white caps (these cap colors are reversed in remakes), though in the NES version, a pure white 1-Up Mushroom can be found in World 6-3. Extra lives are also regularly obtained via the card system, as well as the Spade Panels. Mega ? Blocks in bonus rooms can also give three 1-Up Mushrooms.

Super Mario Advance 4: Super Mario Bros. 3 allows one to scan 1-Up Mushroom cards to gain extra lives as well, ranging from one to 100 extra lives. An unreleased switch card could also make every block with 1-Up Mushrooms give three of them instead (with the Mega ? Blocks giving nine of them), and the Blue Switch turns all 1-Up Mushrooms in normal-sized blocks into 3-Up Moons when activated.

In Super Mario World, 1-Up Mushrooms (also called Extra 1-Up Mushrooms [2] or Extra Mario Mushrooms), with the now-standard white-spotted green cap, behave as they do in Super Mario Bros. 3, but can be found in a more varied range of places. Fishin' Lakitus carry them as bait for Mario, and when Mario acquires it, the Lakitu will chase after Mario, throwing Spinies after him. 1-Up Mushrooms also appear out of eggs when Mario is already riding a Yoshi and hits a ? Block containing an egg. Certain bonus rooms also have rows of ? Blocks within floors, and these Blocks will award Mario with 1-Up Mushrooms if he hits them in the right order. Getting 100 Goal Stars from Giant Gates will send Mario to the Bonus Game, where he must hit eight moving and scrolling blocks to match Super Mushroom, Fire Flower, or Super Star icons with the stationary one in the center. Every three-of-a-kind match will give him a 1-Up Mushroom, and he can win up to eight of them if all the icons match.

There is another item in Super Mario World that can grant Mario lives & the 3-Up Moon, which gives Mario three extra lives instead of one, but is even rarer than the 1-Up Mushroom and is only found in hidden areas, such as behind the Giant Gate in some levels.

A flying winged golden 1-Up Mushroom exists unused in this game.

Appearing differently from its previous design, 1-Up Mushrooms in this game are green with yellow spots. They are also the only mushrooms that can be obtained in Super Mario 64. They can be found in a number of places, such as after going through or collecting a ring of Coins. 1-Up Mushrooms are also found in hidden areas or on top of poles. Most will seemingly slide away from Mario, while others follow Mario until he collects it. Others are static, and Mario can simply run up to the mushroom and collect it. A 1-Up Mushroom can also be found in the room with the Jolly Roger Bay painting. Also, three 1-Up Mushrooms can be found at the top of Peach's Castle if the player uses the cannon to reach there. In some stages, some 1-Up Mushrooms may appear in a small field of flowers. Touching or punching certain butterflies may also spawn 1-Up Mushrooms, though others spawn homing bombs instead. Others appear in some ! Blocks in some missions.

In Super Mario 64 DS, they are the most common mushroom, as Super Mushrooms were added in this version, and they share their design from Super Mario Sunshine and Mario Kart: Double Dash!!. They share the same role in this game and appear in the same places, though a few have been removed from locations in the original game or act differently from what their original counterparts acted like. Like the original game, some will try to run away from the player, others follow the player until he gets a life, and others are also static in one area. Unlike the original game, the word "1-Up" will appear after collecting the mushroom.

1-Up Mushrooms reappear in Super Mario Sunshine. They look very similar to their appearance in Super Mario 64. They are the only type of Mushroom that can be acquired in this game. Aside from gaining an extra life, Mario's health meter and F.L.U.D.D.'s water tank will also be completely refilled upon collection. Some 1-Up Mushrooms try to escape from Mario after they're found, while others can be collected easily. Stomping a Guided Bullet Bill in the final battle may award a 1-Up Mushroom.

Little has changed in the behavior of these mushrooms in New Super Mario Bros. when compared to Super Mario Bros.. However, they can be obtained by collecting a Mega Mushroom and destroying a certain number of objects in the player's path. When this action is completed, a number of 1-Up Mushrooms will fall from the sky, determined by the amount in the meter at the top of the screen (5 1-Up Mushrooms is the maximum amount that can be earned this way). They can also be obtained by getting all the Red Coins from Red Rings when in Fire or Shell form.

In Green Toad Houses, Mario or Luigi must hit blocks with randomized cards in them. There are the following cards:

1-Up Mushrooms act very similar in Super Mario Galaxy when compared to the games in the past. However, they are found in other places such as the bottom of planets or next to black holes. When the player also touches all notes activated by a ? Coin, a 1-Up Mushroom will often appear. The player can also get a 1-Up Mushroom from Lumalee for 30 Star Bits on certain galaxies, particularly before some boss fights. Five 1-Up Mushrooms can be found on the Comet Observatory. When Mario receives a letter from Princess Peach via the Mailtoad, five 1-Up Mushrooms will be included with the letter. When playing as Luigi, 20 1-Ups will be included instead of five.

1-Up Mushrooms act in a very similar manner in New Super Mario Bros. Wii when compared to New Super Mario Bros.. 1-Up Mushrooms are pretty rare in the levels and they are usually hidden well. They can also be obtained by getting all the Red Coins from Red Rings when in Fire, Ice, Propeller, or Penguin form. The Green Toad Houses return with a new minigame, 1-up Blast, in which the player must hop into cannons and shoot the cannon at balloons with numbers ranging from one to four. If the player pops these balloons, the number of lives shown on them will be received. Additionally, landing on eight Para-Beetles or Heavy Para-Beetles in row will award a 1-Up Mushroom.

1-Up Mushrooms return in Super Mario 3D Land and function the same as they do in any other Mario game.

1-Up Mushrooms also appear in New Super Mario Bros. 2. They are replaced by Gold Mushrooms in the Coin Rush mode.

1-Up Mushrooms also reappear in New Super Mario Bros. U and New Super Luigi U. Once again, they give the player an extra life. In the Coin Battle mode, collecting a 1-Up Mushroom rewards the player five coins.

In the Nintendo Switch version of the games, New Super Mario Bros. U Deluxe, all 1-Up Mushrooms within blocks are replaced by 3-Up Moons if Toadette is used.

In Super Mario 3D World, 1-Up Mushrooms appear once again and retain their effects from previous games.

1-Up Mushrooms reappear in Super Mario Maker 2 as a placeable course element. If the night effect is applied and the ground theme is selected, they transform into Rotten Mushrooms.

In Mario & Luigi series, the 1-Up Mushroom revives Mario and Luigi with half of their HP if either Mario or Luigi lose all of their HP in battle.

Mario & Luigi: Paper Jam also introduces the Double 1-Up Mushroom, which revives two fallen party members, but with less HP than a normal 1-Up Mushroom.

In Mario Kart: Double Dash!!, a 1-Up Mushroom appears as an emblem in the front of Toadette's Kart. This kart is supposed to be a recolor of the Toad Kart, which is blue and sports a regular Mushroom as an emblem. The 1-Up Mushroom does not appear as Toadette's emblem in later games, however, likely owing to Toadette's face being used as her emblem throughout many spin-offs. A 1-Up Mushroom represents the Mushroom Bridge track logo as well.

Although they do not appear as items in Mario Kart Wii, in the track Coconut Mall, there is a shop in a hidden shortcut that is selling 1-Up Mushrooms along with other classic Mario items. The sponsor 1-Up Coffee uses a 1-Up Mushroom on its logo and references it in the name.

The 1-Up Mushroom only appears in Mario Superstar Baseball as an item that can be obtained through a slot in Toy Field. When the player acquires a 1-Up Mushroom, they can bat again, regardless if the fielders caught it or not.

In Fortune Street, a 1-Up Mushroom can be obtained through the Memory Block minigame. Once obtained, the 1-Up Mushroom increases all of the player's shop values by 10% each.

In Mario Tennis Open, a 1-Up Mushroom trophy serves as the first cup in the Star Open tournament.

In Paper Mario: Sticker Star, there are stickers called Big 1-UP and Big Shiny 1-UP, which restore a small portion of Mario's HP for 10 turns.

In Paper Mario: Color Splash, there are 1-Up Mushroom cards that restore all of Mario's paint in battle instead of healing Mario.

1-Up Mushrooms proper also appear in their sprite forms in the Super Mario Bros. 3-styled level in the Green Energy Plant. They are found in ? Blocks, although they only restore a portion of Mario's paint.

1-Up Mushrooms also reappear in Captain Toad: Treasure Tracker, serving the same purpose as in other games.

1-Up Mushrooms can be found by opening ? Blocks in certain courses and can be won in the Lucky ? Blocks game at Toad Houses. The player may also earn them in a course by getting 12 combos.

In the Super Mario Mash-Up Pack in Minecraft, brown Mushrooms are replaced by 1-Up Mushrooms.

In Mario + Rabbids Kingdom Battle, artwork of a 1-Up Mushroom can be found on a poster in the laboratory in the introductory cutscene.

Super Mario 64 sprite of the 1-Up Mushroom.

Super Mario Bros. 2 sprite of the 1-Up Mushroom. 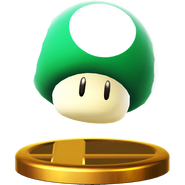 1-Up Mushroom's Trophy from Super Smash Bros. for Wii U